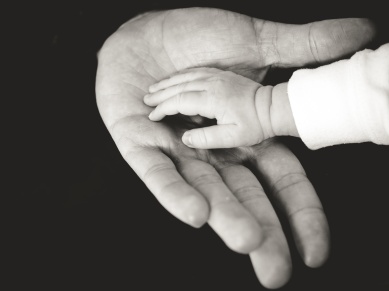 ‘Baby soft skin.’ At least, that’s what they’re meant to have. Ours didn’t though and at three months old she was diagnosed with eczema.

‘Not to worry,’ we thought, unperturbed by such a common ailment and, accordingly, the condition was soon beating a hasty retreat after a brief course of steroid cream.

That’s that little problem over and done with then. Only, weeks later, those angry red patches were back. Surely that had been treated? A trip to the doctors’ led to the same diagnosis as before.

It went. And then it came back. Infected this time. Our hearts sank as we saw our baby’s skin inflamed and raw. This time, as we were given a course of antibiotics and cream, we were more pessimistic than before.

We were right to be. After just a few short weeks, time we spent watching our baby’s skin anxiously, the eczema did, as expected make an unwelcome return. And this time it brought an unpleasant side effect.

‘Don’t scratch darling,’ we’d say, covering her little hands with scratch mitts to stop her burrowing at her skin with her fingernails. ‘Don’t scratch.’

She ignored us. Even if she could understand us, I doubt she would have done our bidding. But fortunately we had the scratch mitts to stop her doing herself any harm.

And then, one night, she worked out how to pull those mitts off.

We got to her before she could do any real damage but her cheeks were still marked with bloody little scratches. If she was in pain though you wouldn’t have known it; in fact, she tried to have another little burrow at her face. We had to hold onto her determined little hands to stop her, much to her fury.

As we drove to the doctors’, back from our brief holiday, we started to realise this was a real problem. And even with another course of antibiotics and cream it was a problem which didn’t go away. ‘Don’t scratch, don’t scratch, don’t scratch,’ we’d beg, to no avail. It would break our hearts to see the relief in her eyes if she ever managed to get a sneaky (constantly trimmed) fingernail to a place where the eczema prevailed. It was relentless. Our whole time together seemed to be spent stopping her from scratching. I remember one night coming home from work and looking at my husband, who was staying home with our daughter at the time, and in his eyes I just saw naked desperation. ‘She doesn’t stop scratching.’

At last, we got to see a specialist who took one look at our daughter and slathered her in cream. ‘It’s like a thousand bites on her skin a minute,’ she explained about the eczema. I felt myself fall then. My poor, poor baby girl; I hated that she had to endure such discomfort and would have given anything and everything to swap places with her.

I also hated the way our darling baby would scream when we applied the latest combination of creams. And I hated the way it took two of us to dress her – one to hold her ever-itch-seeking hands and one to get her into her clothes. I also hated seeing her in the special sleeves she wore at night which, thankfully, stopped her hands escaping for a scratch – but which also stopped her getting access to the thumb she used to soothe her. And I hated the way I always felt the need to explain what the medically prescribed ‘silks’ she wore were to strangers.

And then I realised. This was real life. This was the reality of parenting.

Up until my daughter had been diagnosed with eczema, our parenting path had been as expected, with sleepless nights and nappy explosions and projectile vomiting and earth-shattering screaming. All standard baby behaviour. But the eczema had caught us off guard.

And we weren’t alone. The more parents I spoke to, the more I realised that all of our children had different challenges to face – be it reflux or colic or horrendous sleeping patterns or, like us, eczema. And in some cases, for some poor parents, even worse. The path through babyhood is never smooth – and not as rosy as I might have imagined. At some point, the reality of parenthood kicks in.

Thankfully, the eczema has calmed down and our girl only suffers really bad flare-ups when she’s teething. And some days she hardly tries to scratch at all.

In an odd way, the eczema has made us stronger. We worked together to tackle it and we remained committed to getting the right treatment for our little girl.

And as for our daughter? Well, she’s the bravest person I have ever met, having borne it all with the most beautiful smile and the sweetest demeanour: she’s been my hero.

3 thoughts on “When Parenting Reality Kicks In”